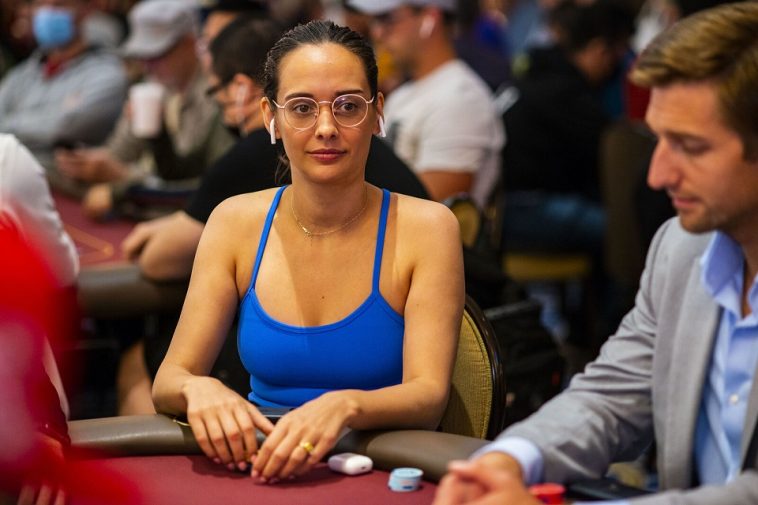 It doesn’t come easy for women to own a successful name in the world of Poker. There are very few names that have been millennials in the Poker community because of the hard work they pulled off. One such name belongs to a well-known lady player, Marle Cordeiro.

Marle Cordeiro was born in the 1990s and was a former model prior to entering the Poker industry. Not many people from the 90s have made it in Poker, but this lady had everything to compete at various levels of Poker. She is a live example of positivity as her optimistic attitude won her many tags in diverse fields like cash games, modeling, vlogger, and definitely a Poker player. If you follow her on social media, it is quite evident that she tackles every phase of life with positivity and hope, be it in her Poker vlogs or short videos. Marle Cordeiro is very popular on social media as people find her content entertaining.

Marle Cordeiro is still young and not established as some high brand Poker player yet. Still, the way she plays, her unique style, sense of humor, various betting skills, beauty, and optimistic approach towards life, are what attract her fans globally. So, let’s dive a little deep into Marle Cordeiro’s personality and lifestyle. Here’s how a young girl made her name big in the betting community.

She is very young, and her career is still in its early stages. Marle Cordeiro began grinding low-stakes games on a stake. Then she slightly progressed to higher stakes games, varying within $5/$10 worth. Marle Cordeiro had approx. $53,000 in live tournament cash games. She has a popular Poker vlog channel with almost 30,000 subscribers. Now, Marle Cordeiro is the presenter of a very famous show, Triton Poker Tour.

Marle Cordeiro was born in 1992 in Boston and is now a successful poker player, but her story isn’t that appealing and is very different from the other poker celebrities. Her father introduced her to this Poker industry who was a low-stakes Limit Hold ’em grinder and used to play at Foxwoods very often.

At the age of 12, Marle Cordeiro’s mother died, and that’s when her father moved to Las Vegas with her daughter to pursue Poker professionally. In her childhood days, she resided in Sin city, where her schooling was done at an institute located on the city’s outskirts. Simultaneously, her father struggled in Bellagio playing Limit Hold ’em games to make a living out of it. But unfortunately, he failed in all his attempts and had to return to New England, having no second option remaining. That’s how Marle Cordeiro started living with her grandmother.

During Marle Cordeiro’s high school years, she was fascinated by modelling and joined the industry. However, her short height was a holdback in her glamour journey. She suffered due to that and didn’t receive any serious work in NY. So instead, she chose acting over modeling and made some headway in the world. Everything was occurring very slowly; simultaneously, her father had set up an apartment in Las Vegas by then. Marle Cordeiro then decided to settle there with his father to pace up her life.

Upon migrating to Las Vegas, she began working as a waitress and played Poker at the lowest stakes after her job. She would play it for 5 to 6 hours a week, so it clearly wasn’t her profession by then. Then her golden time was brought by some backer who staked her for cash games, so she left her job. Unfortunately, as she quickly found a backer, she lost it very soon because of not-so-good performance and a short stint at $1/3 Texas Hold ’em.

She didn’t get any backer for a long time, and when she found one, both he and Marle Cordeiro’s poker-player boyfriend helped her win in high stakes $5/$10 games. Many of her other friends also supported playing and winning big in Las Vegas casinos. The New England pro and her boyfriend witnessed numerous problems along the way, like losing all his bankroll in $5/$10 high-stakes, and even Marle Cordeiro was on stage to lose all her stake at once. However, somehow, they managed to move ahead in life and never look back at petty disheartening things.

As mentioned in the introduction, Marle Cordeiro’s career was very different from others, so it didn’t start with an astonishing massive poker tournament score, as in the case of most others. You now know that Marle Cordeiro was a grinder since her teen days and hence, has focused on cash games over tournaments. As a result, she made very rare appearances at these poker tournaments throughout the years.

Marle Cordeiro made her first appearance in cash games with $185 Rio Deepstacks at WSOP at the age of 21 in 2013. Then, she cashed in many such tournaments along with cashing in the 217 WSOP $1,000 Ladies Event and 2019 WSOP $500 Big 50. She began grinding online in 2020 and hence made four cashes in WSOP’S GG Poker’s online edition.

The biggest live tournament she played was a $9,567 cash game for the 40th place at the 2019 Wynn Poker Classic Event. To this date, Marle Cordeiro has gathered almost $53,595 in various cash game tournaments. But, quite evidently, most of her income comes from cash games, and she has only tasted success in this field since 2018.

You must have seen Marle Cordeiro on Television also, as she was featured in many televised cash games. Battling against some well-renowned poker names has undoubtedly increased her worth. The cameras properly justified her success and clearly earned her a strong fanbase of poker lovers.

Marle Cordeiro was also active in other fields, being a part-time actor and model. However, the top thing is her poker skills and gameplay that aided her in wielding dominance against her opponents.

Marle Cordeiro is very popular on social media. She has a popular Poker vlog channel with almost 30,000 subscribers. However, she was as lost in the crowds as any normal person till 2018, and that’s the year she decided to change everything for herself.

Marle Cordeiro was already grinding cash games when she created a YouTube channel, where she shared her insights about Poker, games’ histories, and her journey of Poker in a very entertaining and humorous way. After that, she rose on social media in terms of fame and number of followers, sharing vlogs about herself, her poker career, and how everything changed for her.

She landed into certain controversies by cracking a few witty jokes. Her dark sense of humor got her many weird names like Justin Bonomo. But she handled everything very lightly as she made a video of herself trying to become Justin’s girlfriend.

There are many other videos on her YouTube channel tracking her poker travels and multiple performances in big televised shows like Poker After Dark, Friday Night Poker, etc. Referring to poker-related content, Marle Cordeiro recorded short videos of sketches of popular poker-relevant topics, most of which are performed greatly.

Her most popular YouTube video shows her in the job of a stripper, ready to sell her body for a poker bankroll, which received mixed reviews. Some thought that she went way too far, which landed her in controversy. But, at the same time, many others took it funnily.

Afterward, Marle Cordeiro became a co-host of the popular “Run It Once” show, “The Rake Podcast,” where she interviewed numerous big players of the poker world, including Jason Koon. Then, Marle Cordeiro signed a sponsorship contract with a major poker room, and this way, her part ended with the podcast.

Towards 2019, Marle Cordeiro worked great with her YouTube channel, had certain part-time acting roles, and invested full time in learning new poker skills. All this earned her an opportunity to work as a presenter for the world’s biggest high-roller tournament, Triton Poker Series, which is even exploding these years.

Though Marle Cordeiro made it to the list of big poker personalities super soon but she didn’t stay in the community for long. Her success and gameplay have been restricted to mid-stakes and some other cash game tournaments. Even nowadays, Marle Cordeiro is in hype for her online presence and poker vlogs despite poker accolades. But, without any suspicion, she has collected a huge amount of money and sufficient profits from playing various poker games.

Marle Cordeiro is only 29 now and has been into Poker for the last many years, but considering her young age, it is needed to be conservative while calculating her net worth. Marle Cordeiro has played in the past, and she even plays it now, but a part of her worth goes to her backer also. Whatever she wins, a portion of that overall winning has to be given to the backer in most cases, and then the rest remains with her.

Then the estimated amount Marle Cordeiro earns annually is around $500,000, and there’s a potential to go up via every single game. The opportunities at Triton Poker are also boosting up for her in the future, which can instantly add to her bankroll. This will allow her to jump into some high-stakes games, winning and achieving bigger things in the future. This way, her net worth will instantly go up in upcoming times.

Of course, social media can reveal that, right? But the twist is that Marle Cordeiro married the love of her life in the meantime that changed her name to Marle Spragg. Marle Cordeiro married a professional poker legend, Ben Spragg (Spraggy, as they call it), after two years of dating. The couple confronted their relationship publicly in November 2020 and soon got married to each other.

Though there are no acquired specifications regarding how Marle Cordeiro met Ben Spraggy but she once shared a humorous video looking for a poker pro boyfriend. Their fans claimed it to have relevance to their relationship.

Marle Cordeiro took a break from Poker after her marriage, but now she is back on the field. She has been active on social media in the long run; that’s why her YouTube channel has been dormant for almost a year. She has earned over 30,000 subscribers on the platform. Moreover, she is also active on Twitter, where she shares and voices her opinions regarding ongoing matters and discussions that are relevant to her personal or professional life.

Marle Cordeiro fans aren’t done yet as they want a 29-year-old young pro-poker player to return to the field soon. She has made her name big in the community, no matter how complicated her path was. She has tried various fields of modeling, acting, and poker-relevant TV shows. She stuck to all of them and managed somehow.

Her fans believe that Marle Cordeiro’s career is still on the urge to bloom. Those who know her backstory won’t be surprised to see her as the main lead in some big poker movies in unfolding times. If you want to follow her journey, find her by the name of Marle Spragg on various social media platforms. Marle Cordeiro’s YouTube vlogs have derived her profound recognition in the world of Poker.